What Does it Mean to Enlarge my Territory or Expand my Borders?

What do you think of when you hear the words enlarge my territory or expand my borders? Enlarge my territory used to be a far-off dream for many, not thinking it was really possible as even traveling around the world in 80 days was a feat not many attempted! (Around the World in 80 Days was a song recorded by Bing Crosby, Diana Ross and others in the 1960’s! I played the song as a piano solo years later in the seventh grade.) With today’s technological advances, it’s entirely possible to appear in multiple places all at once! Today, we can have a world-wide impact and not ever leave our homes!

When I think of enlarge my territory, I refer back to the Old Testament Prayer of Jabez, written between 400-250 B.C. in the book of Chronicles where it says, Bless me and enlarge my territory. Jabez was a well-respected man, hinted to be an ancestor in the lineage of the king’s tribe of Judah. His prayer was answered with blessing.

The definition of blessing is God’s favor and protection. It is what many of us think of saying before a meal. Blessing is what Jabez desired—blessing as his jurisdiction and land was expanded far beyond his then-current territory. The addition of fertile land brought wealth in most cultures then, as well as now. Of course, I believe the actual blessing is up to God and providence, but enlarging your territory is entirely possible as we dream bigger dreams and expand our reach.

One: Define Where You Are

To define where you are, take time to identify your perspectives, skills and experience. Really spend some time on this—it will be well-worth it! Your skills, resources and talent are unique to you, as well as your core values. All are important to identify, especially your core values as they will influence all other areas of your life! Also, spend a little time people-watching and you’ll have confirmation of your uniqueness! You may be drawn to a particular culture because of your background or family history. You may have a business that is universal in scope. Music and art definitely reach across many cultures and generations.

With current technology expanding more every minute, the possibilities for training and world-wide impact are endless if you take the time to discover how you can use your uniqueness to teach, train and communicate. Video, webinars, online training…there is so much opportunity. Start slow with a good strategy and plan. See what will work for you, using just a few tools at first, then expand.

Two: Determine Where You Want to Be

After you spend time defining where you are, start dreaming! I would encourage you first to define your core mission or purpose, then to dream big. The main emphasis of my personal mission and purpose is based on the fact that many women at the halftime of their life are not effectively using their skills, resources and talents. They are faced with fear, risk and time factors that freezes them in their tracks, thus wasting valuable resources! That is a major driver for me with my products and message—whether in personal-professional development or in music. (See: https://goalsforyourlife.com/how-do-you-know-youre-at-halftime/ )

Unless you have a small physical territory you will be endlessly targeting for the next number of years, give yourself permission to set big goals! Define where you want to be in ten years, then five years. Even if you take slow, deliberate steps from where you are now, there’s no reason to stay small. The world is a large place and there is so much opportunity to be pursued.

Three: Commitment to Your Overall Mission

What personal commitment do you need to make to make your dream happen? For many, it’s taking a perspective of a lifelong learner: reading, taking courses and embracing change. There are many online courses, programs and mentorships available at the touch of a computer screen. Don’t be afraid to explore companion fields, or those fields that touch yours in some way, giving you a little different viewpoint and perspective. Implement small daily habits that will help you reach your goals and dreams.

I do encourage you to have a local support group. I talk about a close circle in my book Women at Halftime and that is one of the best check-balances you can have both personally and professionally. There’s nothing wrong with having several groups, each with a different emphasis, but guard your time carefully! The purpose here is not to become a groupie or conference junkie!

Don’t hesitate to dream big as the possibilities are as large as you make them. Be very clear about your messaging and be committed to lifelong learning. With that mindset and attitude, you will be surprised at the possibilities! Make sure you get today’s FREE Download: https://goalsforyourlife.com/ingredientsforsuccess 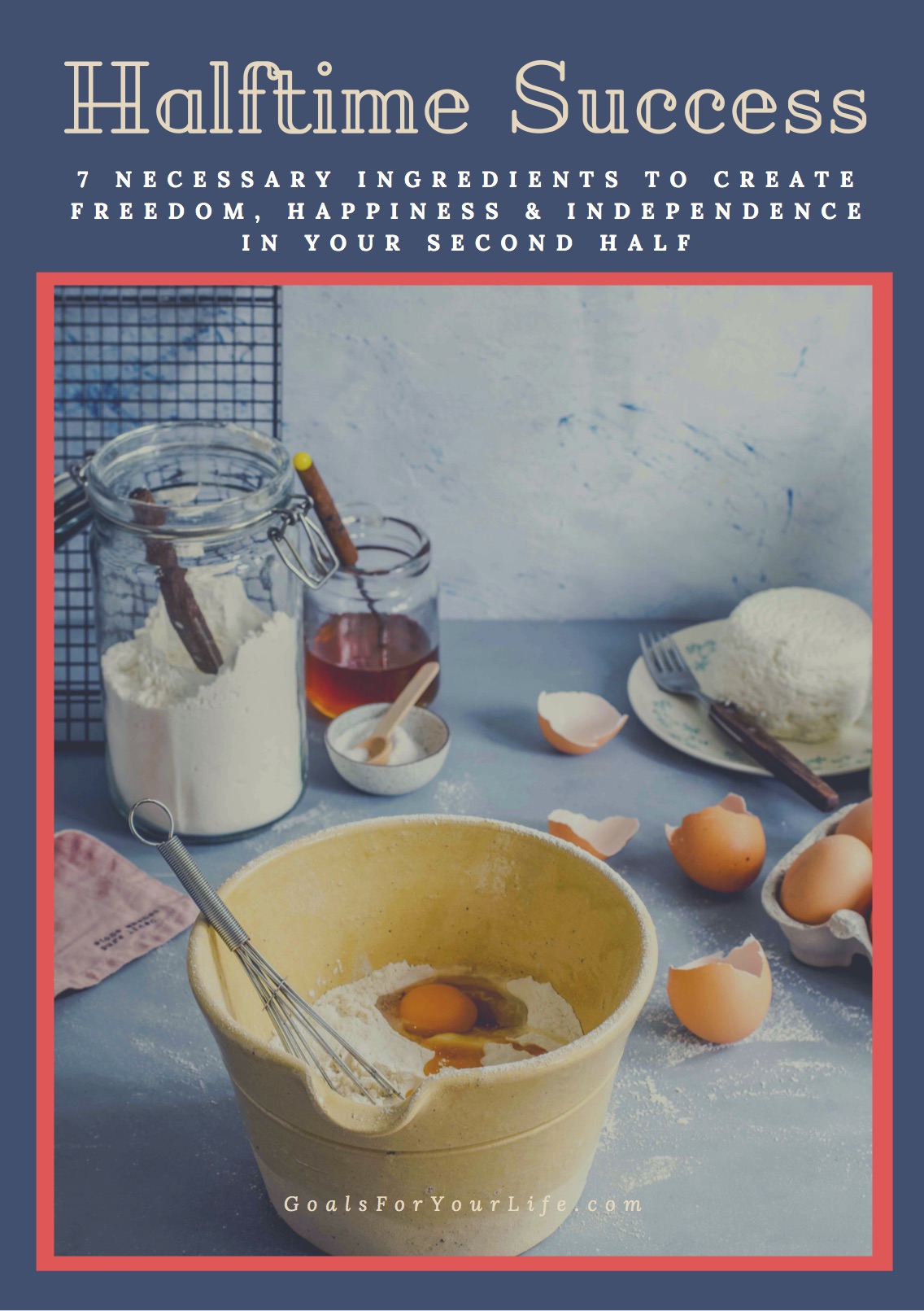 This is a step many entrepreneurs don’t take the time to do in business because of crammed schedules and self-imposed deadlines. I admit, I have been one of them! Eric Ries in his book The Lean Startup encourages entrepreneurs to transform an idea into a product fairly quickly, then measure, learn and revise. This is especially beneficial for those embarking on new endeavors as a side business or turning a hobby into a profitable venture.

Ries also emphasizes really getting to know what your ideal client wants and needs. We can create something super-cool we think the whole world needs and wants, but when so few really buy it, we have to be willing to pivot and find out why. Artists especially get so excited about creating something new that they often rush through this step! (I know this group very well as I’m one of them!) In my work, fortunately many of my projects have paid off, but there have been several where I should have taken more time to study the market as well as my client for better results.

Also, evaluate your use of time and your lifestyle. This past year I found myself working more hours than ever, developing new programs. I realize this is what it takes at first when embarking on any new venture or program. However, because I’ve documented much of my process, I will now turn around and help others create a solid structure and system that won’t take over their life using automation and tech tools. That has been part of my mission and purpose to help others at halftime and I put my head down to help make this happen.

I’ve also resolved to be intentional about evaluation and making small changes and tweaks as needed when launching new programs.  It takes extra time to do so, but by next year, I intend for my little train engine to be close to the top or even over the top! How about you? Let me know where you’d like to be by next year and how you’re going to get there!

About the Author: Deborah Johnson

Permission to reprint articles by Deborah Johnson, M.A., is hereby given to all print, broadcast and electronic media provided that the contact information at the end of each article is included in your publication. Organizations publishing articles electronically, a live, click-able link to https://GoalsForYourLife.com must also be included with the body of the article. Additionally, please mail one copy of your publication to: DJohnson P.O. Box 284 Upland, CA 91784

Any questions, please email to deborah@GoalsForYourLife.com Thank you.